When React first announced useOpaqueIdentifier and later useId I was honestly fascinated, having a consistent unique id across server-side render and client-side hydration is extremely powerful. All of a sudden it becomes possible for a component library to help consumers with accessibility by ensuring that every <input> has an acommpanying <label> with the correct htmlFor set.

Component libraries already did this before, an example from react-spectrum but all of a sudden these libraries got a guarantee, that despite suspense, ... the identifier generated would be unique and consistent given a stable vdom tree.

When approaching this for Preact initially I approached it quite naively, every component can have a consistent identifier when they first mount which can be used as the base for an id. This wasn't sufficient as we can have cases where we don't mount certain subtrees in SSR but we do mount them on the client or we have trees that suspend and ultimately we create race-conditions.

While thinking about it in our Virtual DOM tree we need to assess the position of a certain node, a node can have an endless amount of children and can be at a certain depth. This means that we can uniquely identify a tree by building up the position a child-node is in the parent-children and keep that around as a mask we build up for each node. 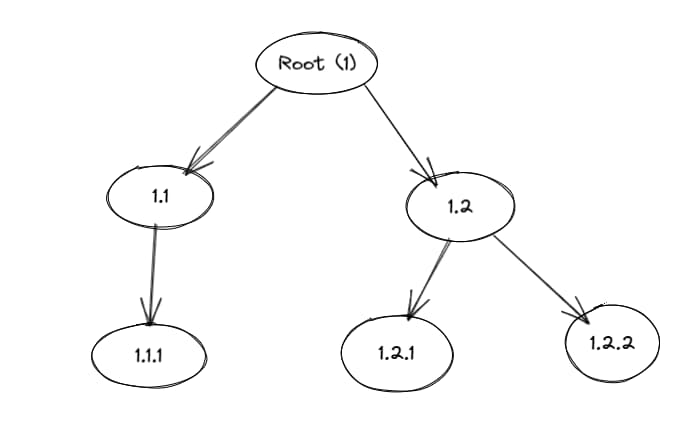 The above diagram shows the reasoning employed here, the depth is accounted for by adding a new number to the mask and the position in the array of its parent makes up the number we are appending. This should be sufficient to create our unique tree-identifiers.

Now all that's left is counting how many useId invocations occur in a component, this in and of itself was easier due to how hooks work, remember the rules-of-hooks where we enforce not callign it conditionally as well as not calling it in a loop? This means that the amount of hooks and the order of them is deterministic!

So now we have a base-id and a counter unique to the invoking component, the deeper the tree the longer the id would get if we don't do anything with it so we decided to hash the value. An important aspect here is that we don't want people to pay a cost for a feature they don't use so you would only pay this cost when you decide to invoke a useId.

In Preact we have often seen people use react on the server and Preact on the client to hydrate to reduce the client-side bundle, this feature effectively works against that as we require preact-render-to-string and preact so we can have consistent ids.

And as always I would love to shoutout my fellow Preact maintainers for reviewing and being patient with me always trying new things!